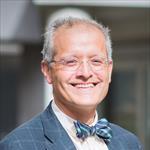 Edgar Pierluissi, M.D., is a Professor of Clinical Medicine at UCSF. He is Medical Director of the Acute Care for Elders Unit at the Zuckerberg San Francisco General Hospital.

Dr. Pierluissi has cared for vulnerable populations his entire career and is committed to healthcare quality improvement. He merged these interests as the founding Medical Director of the Acute Care for Elders (ACE) Unit at the San Francisco General Hospital. The SFGH adopted this model of care to meet the needs of a growing older population in San Francisco. Since opening in February, 2007, and expanding the unit in 2009, the Unit cares for over 1000 patients each year.

Dr. Pierluissi received his MD from Harvard Medical School and completed training and Chief Residency in Internal Medicine at the University of California, San Francisco and a fellowship in Quality Improvement through the Veterans Affairs National Quality Scholars Fellowship. After training he worked for the County of San Mateo as a staff physician, as the medical director of the North County Health Center, and as VP for Quality Improvement. He joined the faculty of the UCSF Division of Geriatrics in 2006 and the SFGH Division of Hospital Medicine in 2008.